We don't know about you, but the heat this summer has been brutal so far to us! Sounds like a good excuse to grab some gaming time and catch up on the latest and greatest Terraria news, right? Development work on the Labor of Love update is in full swing across both the Re-Logic and DR Studios teams - and we are really excited for some of the juicy spoilers that we have in store for you this month (on top of those we have already shared this month in case you missed them on our socials). That said, grab a cold beverage, cool off, and settle in for this month's State of the Game!

TERRARIA - LABOR OF LOVE UPDATE
Labor of Love really feels like it is living up to its name more and more as each week of development goes by. The team has conducted a couple of playthroughs along the way, and we have found these to be some of the more fun and unique sessions that we have had for years. We have shared a lot of what is going into this update thus far, but rest assured that we have held some rather substantial changes and additions close to the vest as is tradition. We have a bit more to share this month... but some things you will have to discover yourself when Labor of Love launches.

No, we still do not have a date to give you - but we do see the light at the end of the tunnel...

Spoilers though? We've got one for you!

Wow, when you guys said you were going to be transparent with us about the new update, you weren't kidding!

Another month and another 1000 additions to the Workshop - with over 57,000 packs and worlds so far, you are missing out if you haven't taken the time to check out the Workshop yet.

We hope to get around to doing some "summer cleaning" of the Workshop once Labor of Love settles down a bit. If you get what we mean. (some of this has already begun)

WHAT ELSE IS GOING ON?
Right now, the core focus of the time is the final push to get Labor of Love done to what we have as the vision for the update. Still have that one eye on the future though.

On June 2, 2022, we launched tModLoader for Terraria 1.4+ to Terrarians everywhere. This was the result of countless hours of hard work by the TML Team and many other contributors over the span of nearly two years, and the team is beyond thrilled to have TML 1.4 in your hands. We specifically want to recognize the following folks whom have made invaluable contributions to the TML project since Journey's End released in 2020:

The launch of TML 1.4 also allowed the team to bring the tModLoader Steam Workshop online. We have already seen nearly 1,400 mods make their way onto the Workshop in the first month alone, with some of the more well-known mods being added to the Workshop in recent days. Coupled with the in-game mod browser, the TML Steam Workshop is a great way to explore what modded Terraria has to offer - check it out today by clicking the banner above!

TMODLOADER 1.3 STILL AVAILABLE
Of course, the developers behind each individual Terraria mod will need to update their mods to the 1.4 era, so hang with them while that process takes place. We also realize that some older mods that are no longer in development may never make the leap to the 1.4 era. Given that, we have kept the 1.3.5 version of TML playable

How do I switch to back to 1.3 tModLoader?
1. Right click on tModLoader in Steam and select 'Properties...', then 'BETAS';
2. Select '1.3-legacy' in the drop-down menu on top;
3. Close the window. You don't need to type any passwords!

WHAT'S NEXT FOR TML?

One of the biggest priorities this last month has been to rapidly respond to release issues, and fix several of the bugs that users are seeing.

We hope the upcoming July stable release will fix a large portion, but we know there is still more to do and are actively working to resolve several. We appreciate everyone's patience as we pursue a better modloader!


Our other big priority this month was fleshing out tModPorter.


This custom software, bundled with tModLoader, provides the capability to quickly bring a 1.3 mod to majority ported to 1.4.

Further still, it will also be the primary tool we provide so modders can do the minor porting for code on each monthly release moving forward.

We hope that all modders take advantage of this tool to make their lives easier, and if you have improvements, don't hesitate to reach out in our discord.

PlayStation, XBOX, Nintendo Switch, Mobile - DR STUDIOS
The team at DR Studios has been feverishly working to try and keep pace with the development of Labor of Love that is taking place on the PC side of things. Yes, in case you missed last month's State of the Game, we have already begun active development of Labor of Love for Console and Mobile. In addition, earlier in June we shared a "first look" spoiler on Mobile (which you will find below!) - the first time that brand new Terraria content/features have been shown on anything other than PC. Well, we don't want our Console Terrarians feeling left out - so here's another first look at a brand new feature coming to Terraria when Labor of Love is available... 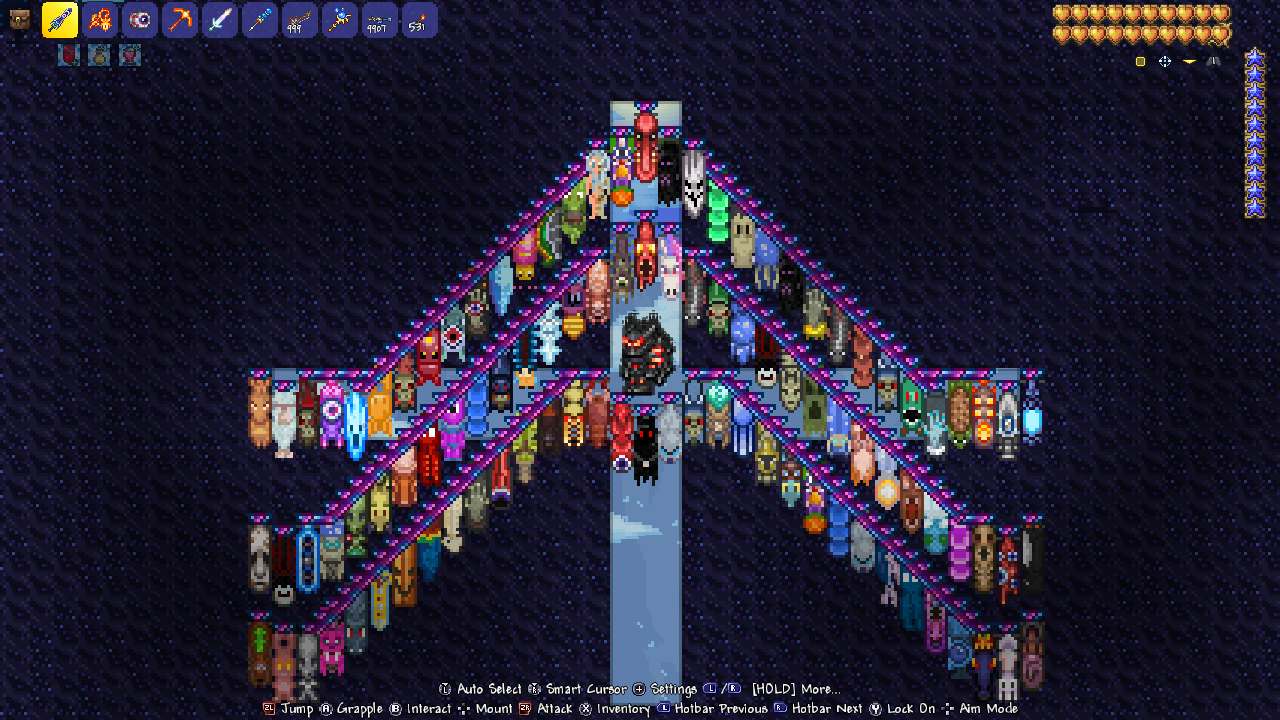 No longer contained to blocks alone, the Banners finally broke free - able to be in full display on platforms and stairs alike!


So yeah, like we were saying, after years of playing catch-up, it is such a fun time to be able to work on Mobile (and Console) in parallel to the ongoing work on PC. What's that? You missed the Mobile spoiler earlier this month? Well, allow us to share it once again below...

TERRARIA MERCHANDISE UPDATES​
Nothing new to share this month... but we have lots of fun stuff gearing up for the rest of the year. Hoping to be able to share some of that very soon.

OTHER COMMUNITY NEWS
TERRARIA LEGO IDEAS CONCEPT UPDATE - 2300 SUPPORTERS TO GO!
The Terraria Lego Ideas concept that we have been mentioning for the past few months (check out the State of the Game for April and May for details) is edging ever-closer to the magic 10,000 milestone. Currently sitting at around 7700 supporters, it has climbed the charts fast! If maybe, possibly, seeing such a thing happen (or maybe something else similar, who knows?) in the future piques your interest, click the link below and toss your support behind this idea.

Congratulations to the Terraria community on reaching the incredible 1 million subscriber milestone on Reddit! This is truly a worthwhile accomplishment that we all get to share. Shoutout to the r/terraria moderators for their contributions in facilitating an awesome hub the community has grown to love. 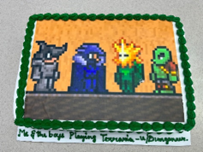 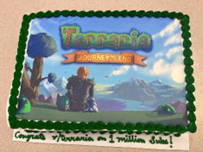 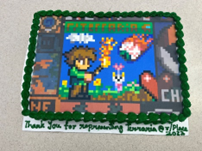 To celebrate the occasion, we created channels in the community where you can share your favorite r/terraria memories throughout the years. There is still time to participate and read about the awesome threads shared by the community.


If you want to share your favorite threads & memories on the forums then you can share them in r/terraria Subreddit Reaches One Million Terrarians[forums.terraria.org]!

OFFICIAL FRENCH TERRARIA DISCORD SERVER
We have some incredibly exciting news! Terraria is now officially partnered with Discord for an awesome new global initiative involving non-English communities! We are proud to announce the official French Terraria server located at Join the TerraServ Discord Server[discord.gg]! If you speak French or know any Terraria players who speak French and would be interested to join the official French Terraria community then please feel free to forward them the invite.

Join for fun conversation, activities, and more! We will make additional announcements related to the French server and other non-English Terraria servers in the future. However, for now please welcome our newest verified community.