As we have mentioned over the past few months, the team has been hard at work on an update to further optimize Terraria for Steam Deck play - inclusive of performance and controls. With the Steam Deck officially shipping out to players starting today, we are pleased to be able to push this update out to everyone just in time! For Terrarians that are not playing on Steam Deck at this time, dont fret, as we have some quality of life, balance, and bug fixes for you as well. Without further ado, let's dive right in!

Please note that this update also includes an update to the Terraria Dedicated Server application. You can always find the latest version of this at the bottom of https://terraria.org/, but we have included a link below for today's version as well:

TERRARIA STEAM DECK CONTROLS​
Beyond technical under the hood performance optimizations and such, what else do we mean when we say "optimizing Terraria for Steam Deck"? Well one area of focus has been controls.

When we sat down to enjoy Terraria on the Steam Deck for the first time, we immediately realized that we needed to make a few tweaks to fully take advantage of all that this new system has to offer. Above and beyond the default touch controls provided by Steam Deck (which we may look to improve on in the future), we put together the little graphic below to show you how we have optimized things for all of the controls available on the Steam Deck: 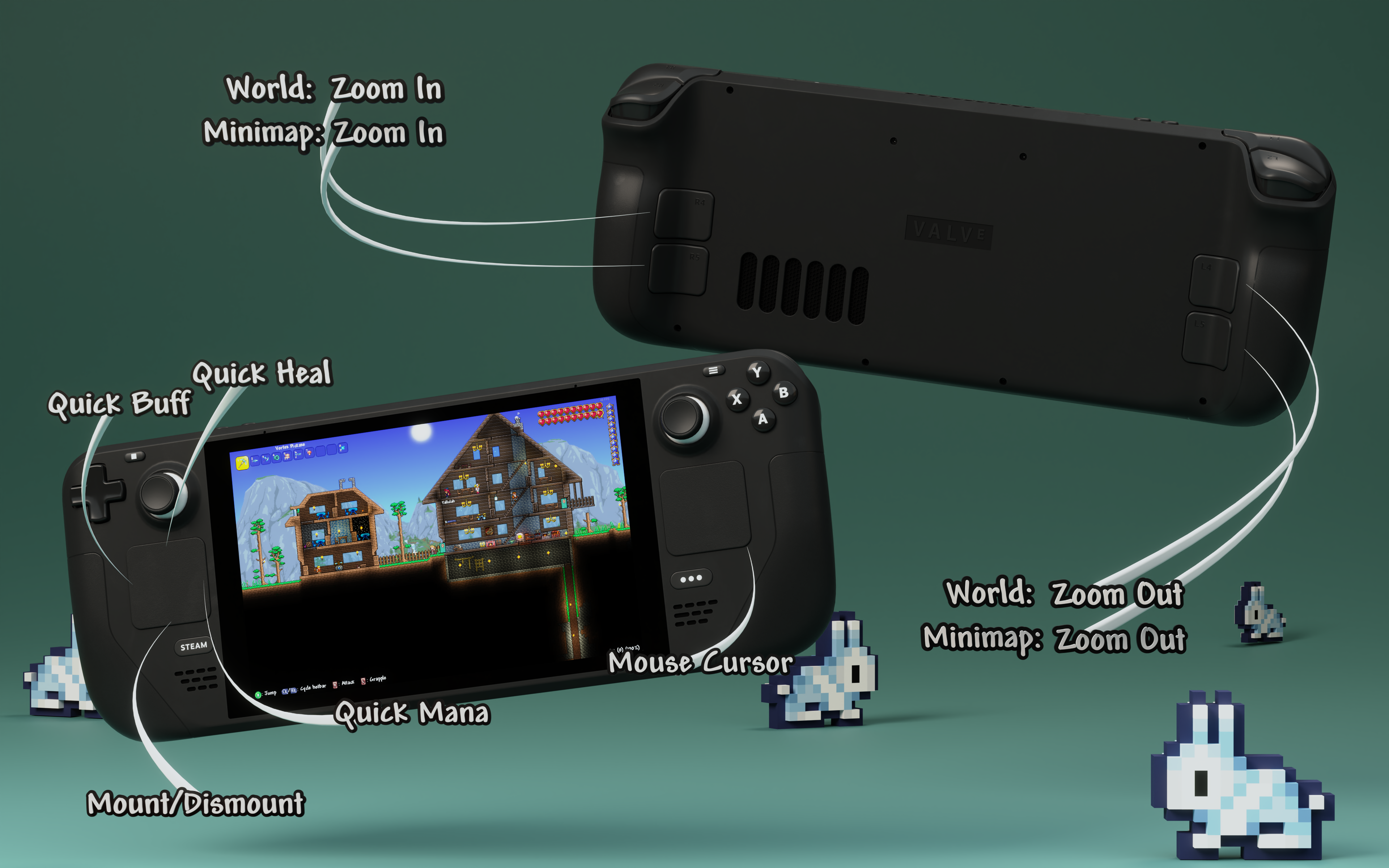 Left Trackpad
– This gives you access to a handful of often-used commands right at your fingertips:

Right Trackpad
– This provides the player with a manual cursor, akin to using a mouse or a trackpad on a laptop

Back Buttons
– These will give you easy and ready access to all of your minimap and game window zoom options:

Battery Life
- We have done a handful of battery life tests on our development kit playing Terraria, and we find that we can typically get between 3.5 and 5.5 hours of playtime between charges – depending on brightness settings as well as the intensity of action in the game.


Obviously, Terraria is a game with a lot of possibilities in the way in which you can control things and in the demand for controls/buttons to get the job done. We are super happy to be able to take full advantage of the additional space on the control map provided by Steam Deck in order to help streamline your Terraria adventures and make controlling your character and world feel “just right”. Of course, all of these are just defaults that we think feel great - but everything is remappable in case you disagree and want to change things up!

Click here for the source of this article RSS Feed