Terraria State of the Game - January 2022

We missed you over the holiday break - between all of the usual family and friends, running around, and with more or less all of the pertinent news items being covered off at the end of November, we decided to push off the State of the Game and just move on into the new year. So here we are, 2022 has kicked off with a bang. Week one saw Terraria winning the 2022 Labor of Love Steam Award as well as the launch of Journey's End on Nintendo Switch. Week two saw the re-imagined China Mobile version of Terraria winning TapTap's 2021 Game of the Year. Behind the scenes, things have been equally busy, with each development team hard at work on what is to come later this year. What all does that entail, you say? Let's get into the details! 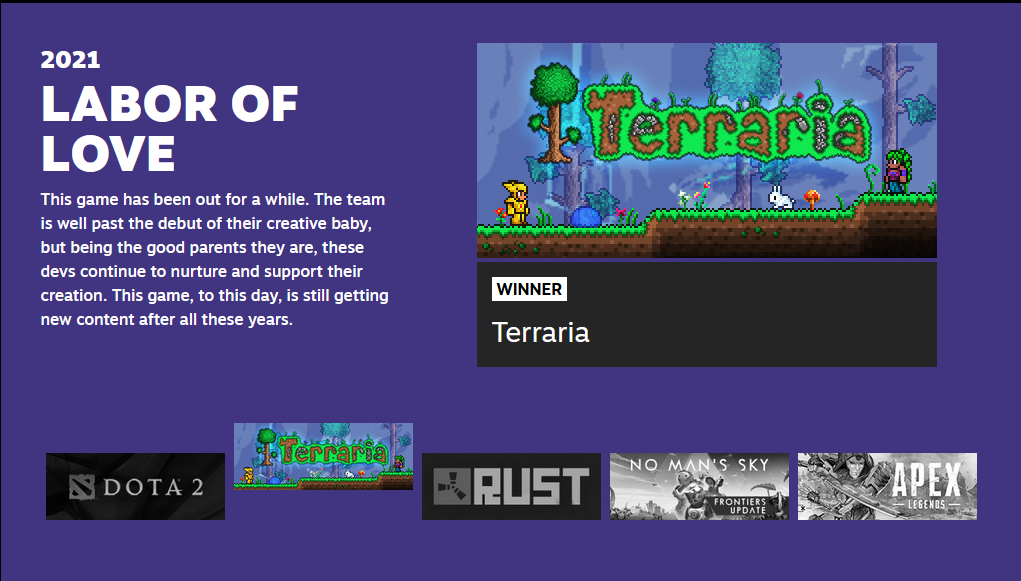 You like us, you really, really like us! At long last, the loyalty and strength of the Terraria Community won out, delivering the 2021 Labor of Love Steam Award to Terraria! As in years' past, we were up against some pretty tough competitors, so this is no small feat. We cannot say what all this means to us, other than "a whole lot" - I think a couple of team members might have even teared up a little. Suffice to say, we cannot thank you all enough for your amazing support this year, in the past, and in what is going to be a bright future. You all are what this is all about. Bravo! 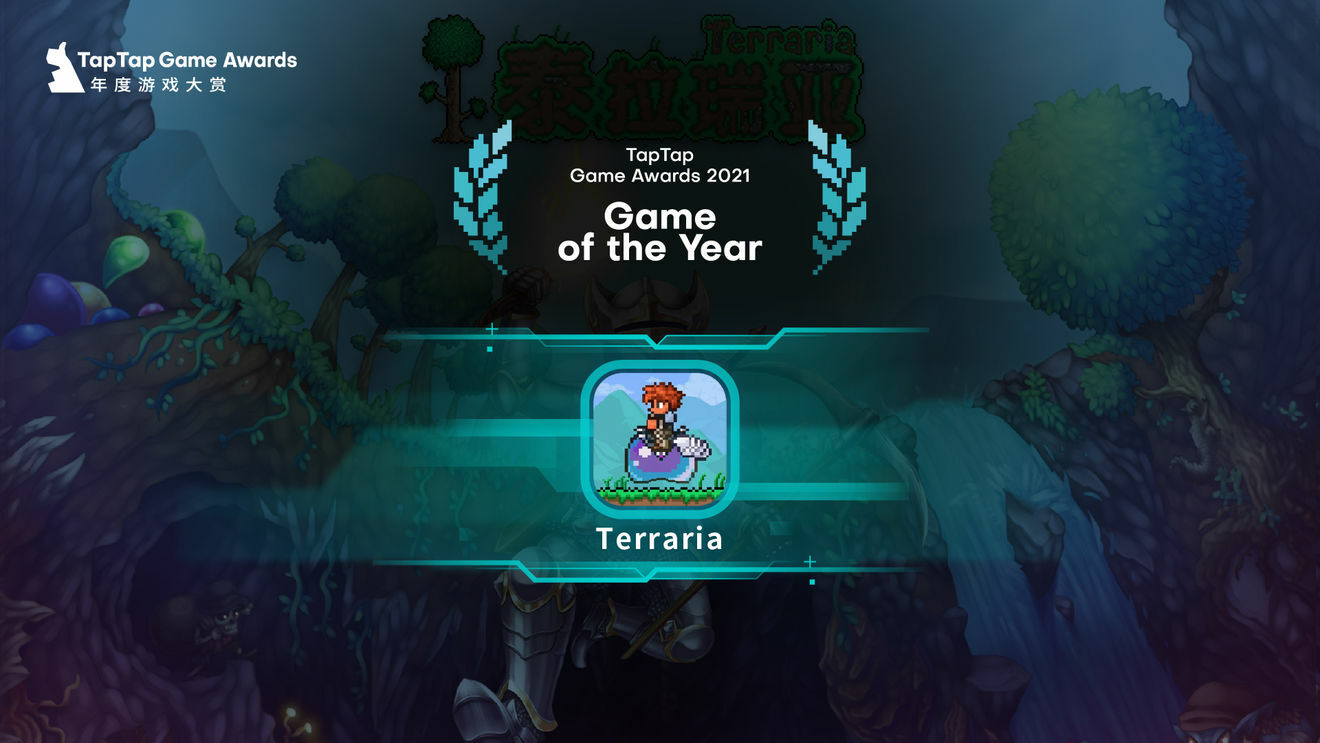 [www.taptap.io]
Click the banner above to read the 2021 TapTap Awards reveal

Hot on the heels of the Labor of Love Award, we found out that the China Mobile version of Terraria won TapTap's 2021 Game of the Year. Yeah, we know this isn't technically PC news, but we are excited nonetheless, and felt it fit right in next to the Steam Award. This is a fully revamped and reimagined version of Mobile in China - much more aligned to the version that the rest of the world enjoys. It is beyond exciting to see such a strong level of support and enthusiasm for this release of our beloved game, and we look forward to seeing what other milestones it can achieve! Big thanks to the team at DR Studios and XDN for their hard work in making China Mobile awesome again!

The level of quality and quantity on the Terraria Steam Workshop just continues to climb - over 46,000 packs and worlds so far, and it just... keeps... growing! If you have not checked out the Workshop yet, what are you waiting for?

TERRARIA WORKSHOP DEVELOPER'S CHOICE SELECTIONS
Over the break and beyond, the team has had a chance to catch up on some of the latest Packs and Worlds on the Steam Workshop. So, here you have it - our latest suite of Developer's Choice sections! 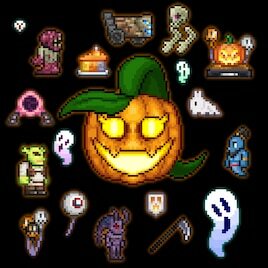 The Spirits of Halloween
The best party is a Costume Party, am I right? 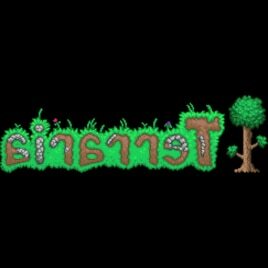 airarreT
What could possibly go wrong when you combine every seed together and toss it into For the Worthy Mastermode? 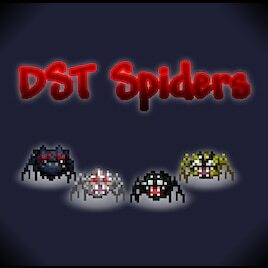 Don't Starve Together Spiders
Kinda wish we had done this one ourselves... 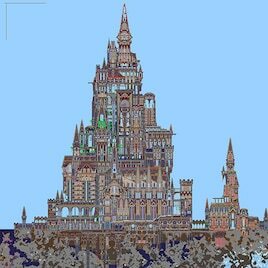 Castlevania Map
What a horrible night to have a curse... on this simply amazing map.

WHAT ELSE IS GOING ON?
Funny you should ask! Steam Deck optimizations are nearly complete - in fact, we are likely looking to push those live soon to be ready well in advance of Steam Deck launch in late February. Unless you are playing on Steam Deck, you will not see much difference in this build, outside of a handful of bug fixes, etc. Our team is beyond excited for this new platform, and we have had a ton of fun messing around to try and get things feeling and running "just right" in time for launch. As for what else we have going on - a lot of experimentation continues around the future. After all, we need to be sure that our labors are worthy of your love moving forward, right?

Oh and Terraria is currently 50% off during the Steam Lunar New Year Sale - celebrate the Year of the Tiger by picking up a copy of Terraria for yourself or a friend! Click the banner above to head to our store page now!


We're making slow, but steady progress towards a jump from Alpha to Beta! Before everything else, we would like to announce to the forums the late news that we have a new API developer. Everyone give a warm welcome to Solxan - a long time contributor to 1.4 TML - whose help has been so immeasurable towards the progression of project, that he now has been given write permissions for the tModLoader repository.


We appreciate everyone's feedback and input during the Alpha phase thus far, and we hope that you have enjoyed a glimpse into what the future will hold for tModLoader. More to come on the Beta and how all of that will work as we get closer, but we do not want to get too far ahead of ourselves. For now, here is a bit more detail into what we are working on right now...


Our main development focus is currently on the following:

Of course, the TML 1.4 Alpha remains available for you to check out. Again, please keep in mind that this Alpha is primarily intended for developers as an audience - so play around with it at your own risk!


As always, you can keep track the current progress and such more in real time at tModLoader/tModLoader[github.com] (But note that the completion percentage doesn't mean anything, because issues and PRs don't have weights.)

PlayStation, XBOX, Nintendo Switch, Mobile - DR STUDIOS
Greetings, Terrarians! The team has mostly been focused on Switch Development and hotfixes... but we already have a keen eye on the future! What will that entail? Read on!

​
CONSOLE/SWITCH/MOBILE CONTENT PARITY DEVELOPMENT IS UNDERWAY
What's up next now that we have Switch Journey's End out of the door (pending a few more fixes, of course)? Why its the long-mentioned Content Parity Update! For years, non-PC players have followed behind on content, but these days will be coming to a close in 2022, as the DR team will be bringing content parity for everyone to fruition. Obviously, each platform will have its differences in features (touch for Mobile/Switch, etc), but as for the core content of the game itself, everyone will be on the same page. The timeline is still a bit TBD, but as soon as we have a better idea, we will share it. The plan is for this to come to all platforms at once... or as close as possible.

Now, to be clear, that does not include things like tModLoader or Steam Workshop-style pack support at this time. Those remain interesting ideas that the team will explore - but first things first, getting everyone to the same version of the core Terraria experience. We hope that you are just as excited as we are!

What's that, you want a quick teaser... well, alright then. To be clear, we have a lot of work ahead still, but without further ado we give you

Deerclops on Console and Mobile - an Early Sneak Peek
We are, of course, aware of some of the larger remaining bits (further KB+M work, Online+Splitscreen MP, etc) - and we still plan to get to these! Thanks so much for your feedback and reporting during the launch and since - with your help, we are able to fine tune and sort out issues to create a better Terraria experience for everyone!

TERRARIA MERCHANDISE UPDATES
BRAND NEW TERRARIA PLUSH
Plush is back, Terrarians! After a long, long hiatus, our partners at Vidglo are launching the first three brand new Terraria plush - available right now! Kicking off this new wave of Terraria plush are a re-imagined Bunny and Eye of Cthulhu alongside a never-before-available Eater of Souls. Check out each of these below - and click the banner to head over to Terraria.shop to pick yours up today! 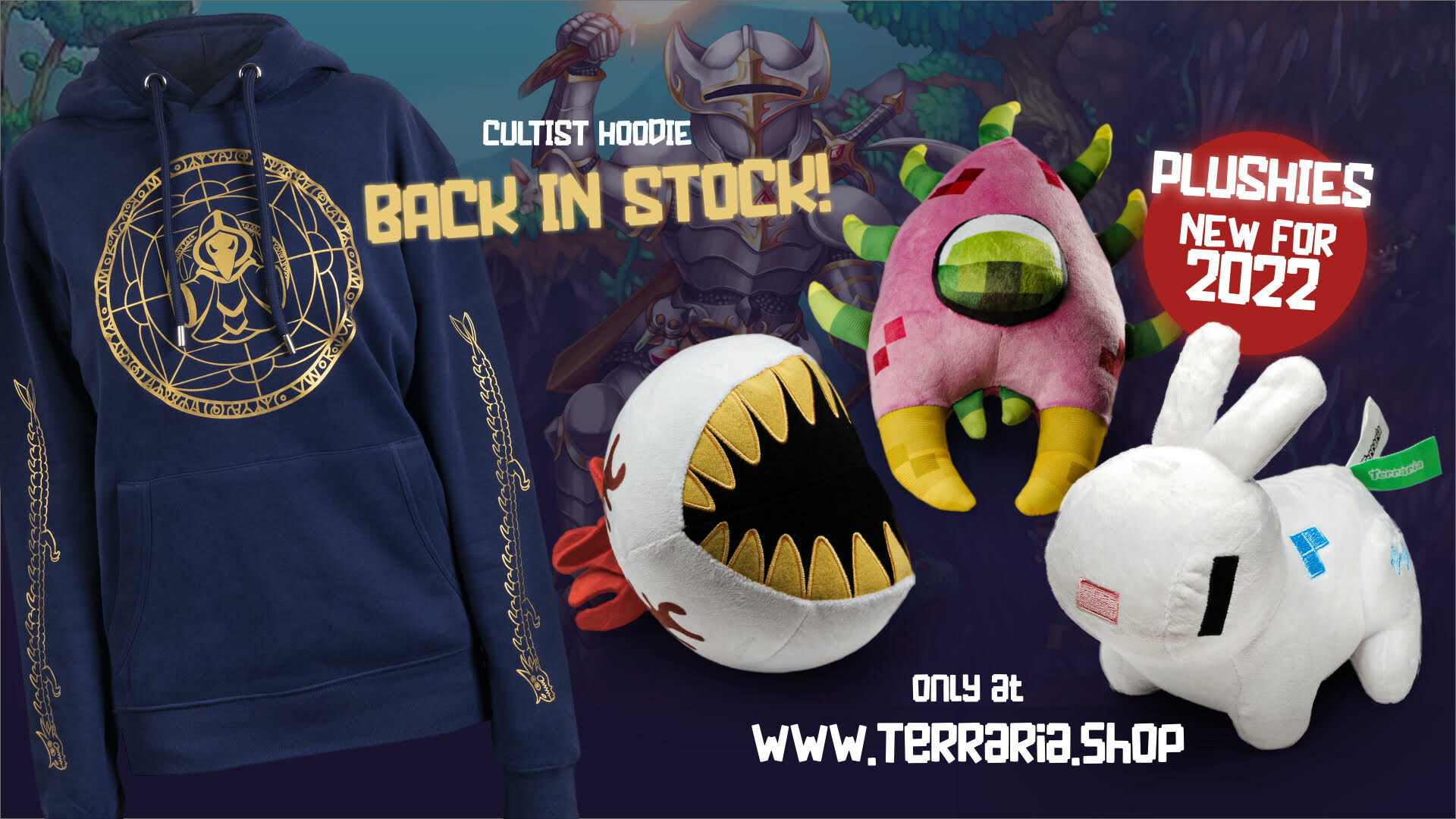 TERRARIA X JAIDEN ANIMATIONS LUNATIC CULTIST HOODIE IS BACK IN STOCK ONCE AGAIN
Perhaps our hottest clothing item of all time, the Cultist Hoodie sold out twice over the holidays... but as of today, it is once again available in case you missed out earlier! 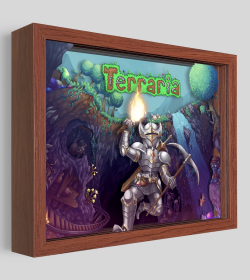 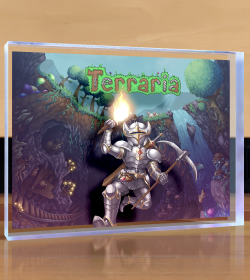 Our good friends at Artovision have released a second design in their Terraria Shadowbox/Desktop Art series - this time based on the Silver Armor Terraria Keyart. Click the images above to check these out! 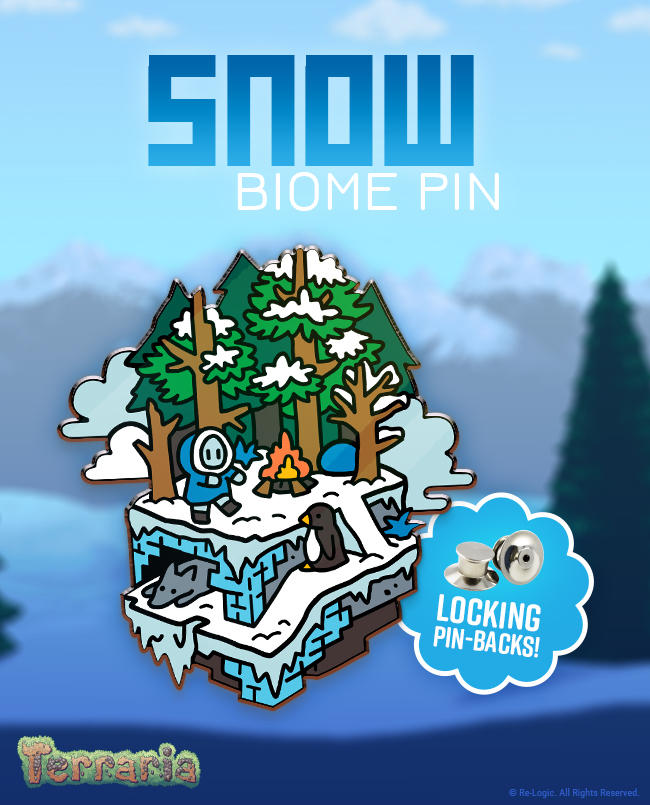 The latest in the Terraria Biome Pin Series, Snow, is out now over at Sanshee's site. There are a few more of these Biome Pins planned, so you won't want to miss your chance to have the whole set!

OTHER COMMUNITY NEWS
JOIN THE UNITED SERVERS OF DISCORD ALLIANCE
The Terraria community is partnering with awesome Discord gaming communities for fun collaboration events! This is an open invitation for the servers for other games, content creators, game hubs, and gaming associated servers. The collaboration discussion can begin by having an admin or moderator server representative message the 505 Games Terraria Community Manager at MrGameTheory#8778 on Discord. 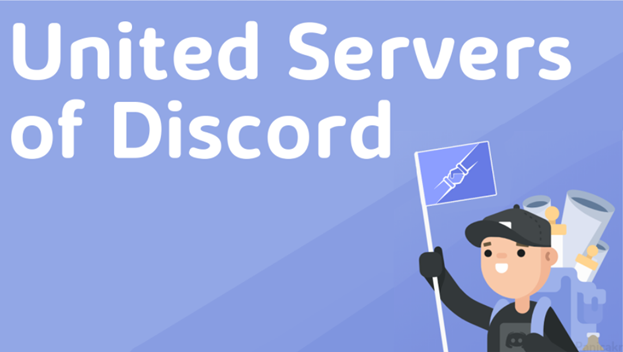 Terraria has teamed up with many other incredible communities to form the largest Discord alliance ever! Alliance members include the largest Discord servers for Roblox, League of Legends, Star Wars, Dying Light 2, Warframe, Animal Crossing, and many more. We are currently accepting new server members to join our Alliance! 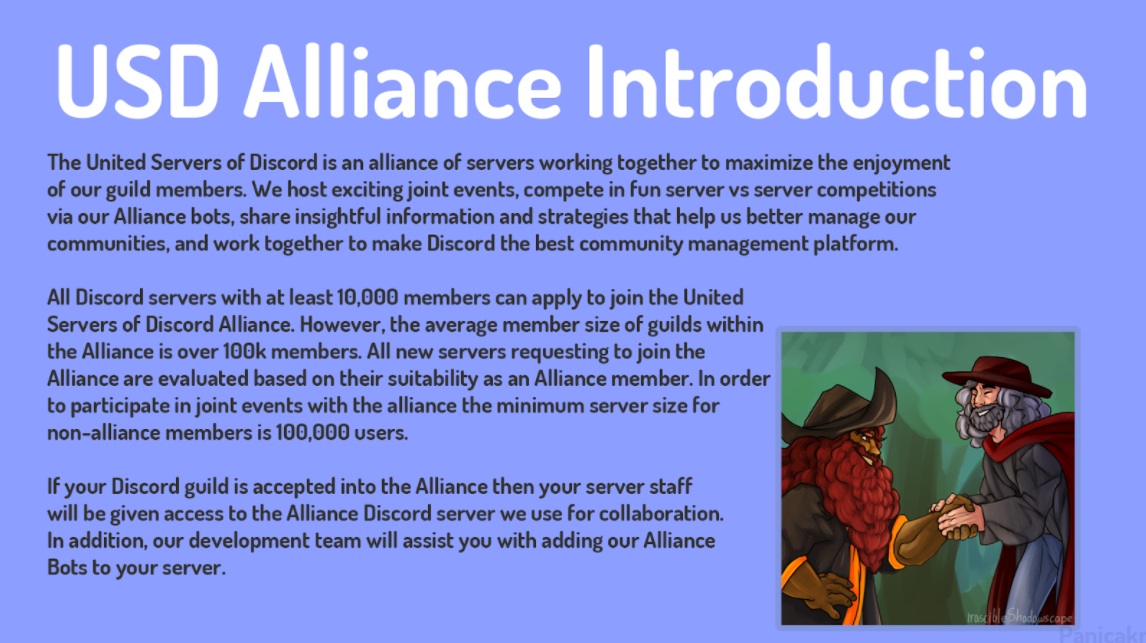