Terraria State of the Game - October 2021

One of our favorite holidays approaches - Halloween! We don't know about you, but between the decorations, costumes, parties and more, it is just such a fun time of year. We hope that each of you gets a bit of time to indulge your spookier side and to maybe enjoy a handful of tricks or treats. Speaking of, we have a full candy pail of both to hand out for this month's State of the Game... so step right up, ring the doorbell, and let's see what horrific surprises await Terrarians everywhere!

PC - RE-LOGIC
SOMETHING WICKED THIS WAY COMES - CROSSOVER WITH DON'T STARVE TOGETHER REVEALED!

In case you missed the big reveal last week, we are doing the second major crossover update in the history of Terraria - this time with the long-running hit indie survival game, Don't Starve Together! Our good friends at Klei Entertainment have been hard at work in parallel with the team at Re-Logic in order to make both sides of this crossover worthy of the fanbases - and authentic to the gameplay - of each of these amazing titles. As you can tell from the above gifs, we are swapping terrifying foes. What else might be making the journey to DST and vice versa? Well... you will have to wait just a bit longer to find out. Stay vigilant, Terrarians, for life in The Constant can be quite harsh indeed!

TERRARIA IS 50% OFF DURING THE STEAM HALLOWEEN SALE! 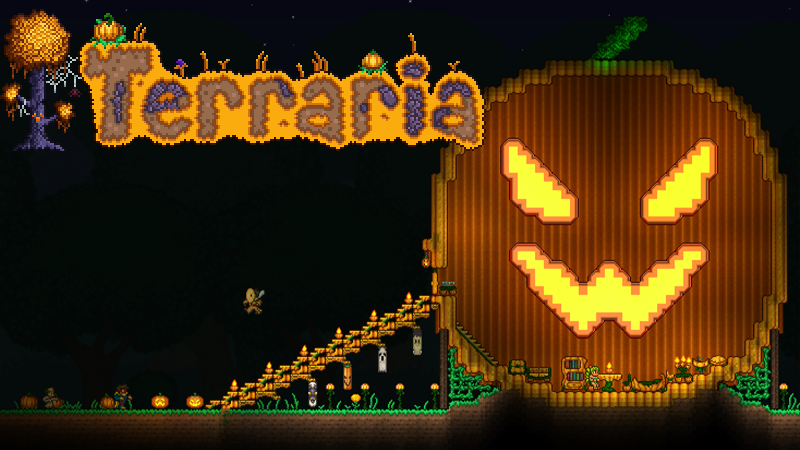 Excited about the upcoming crossover? No better time to pick up a copy of Terraria for yourself - or as a treat for a friend - than right now! For the duration of the Steam Halloween Sale, Terraria will be half off! Click the banner above to head to our Steam Store Page and grab yours now!

The level of quality and quantity on the Terraria Steam Workshop just continues to climb - over 30,000 packs and worlds so far, which is just insane! If you have not checked out the Workshop yet, what are you waiting for?

TERRARIA WORKSHOP DEVELOPER'S CHOICE SELECTIONS
As in the past, we are gathering up our possible selections that we will reveal in a future State of the Game!

WHAT ELSE IS GOING ON?
We have a few Game Jams that are a bit on hold while we wrap up the collaboration with Don't Starve Together and the Steam Deck optimizations. The team is quite excited to delve back into these experiments soon!


So, for now, we will have to just continue to ask for your patience and trust in our process as we continue our own journey towards whatever lies ahead.

The work with and on the tModLoader 1.4 Alpha on Steam continues (thanks for all your feedback and help thus far!) - you can click the link below to find out more. Again, please keep in mind that this Alpha is primarily intended for developers as an audience - so play around with it at your own risk!


As always, you can keep track the current progress and such more in real time at tModLoader/tModLoader (But note that the completion percentage doesn't mean anything, because issues and PRs don't have weights.)

Greetings, Terrarians! Last time we checked in, we were just about to release Journey's End for Xbox and PlayStation. What a month it has been since then! Let's take a moment to check in on progress made on your feedback and bug reports - as well as a glimpse into what lies ahead!

The team is feeling pretty good about the state of things after the patch from last week, but we know a handful of bugs and issues are still wandering out there in the wild. We have most of these documented (again, the best way to make sure your issue is seen is to file a Bug Report in the TCF Bug Section by pressing the button below!)

In parallel, the team at DR is hard at work on the nuances required to get Terraria: Journey's End out on Nintendo Switch. The good news behind the scenes is that all of the fixes we just implemented for Xbox and PlayStation will be there on day one for Switch players - definitely a win-win there for everyone! Of course, we are sure you want to take a glimpse at what might be going on right? Well... here's a few snaps from recent testing - Moon Lord dying, his Bestiary Entry, and a bit of touch mining. (Before anyone asks, I like to play with as much space as possible, so I shunk/zoomed my UI pretty small - but this is all adjustable) 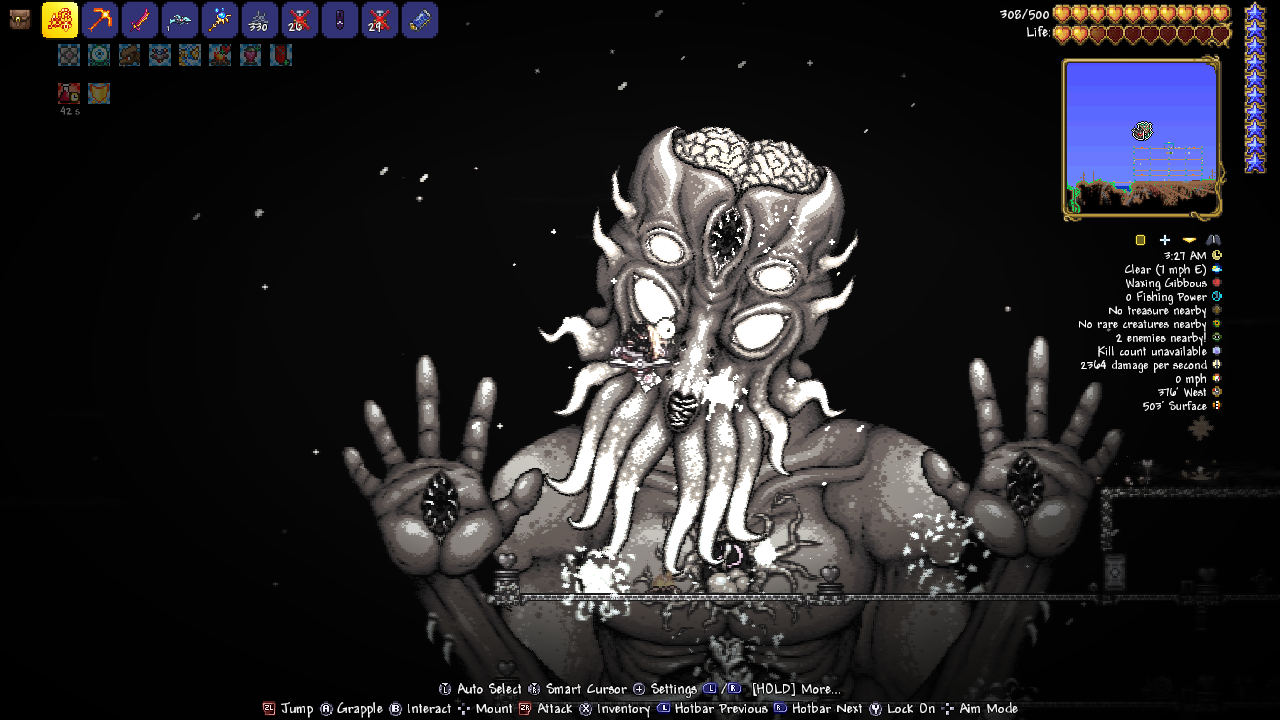 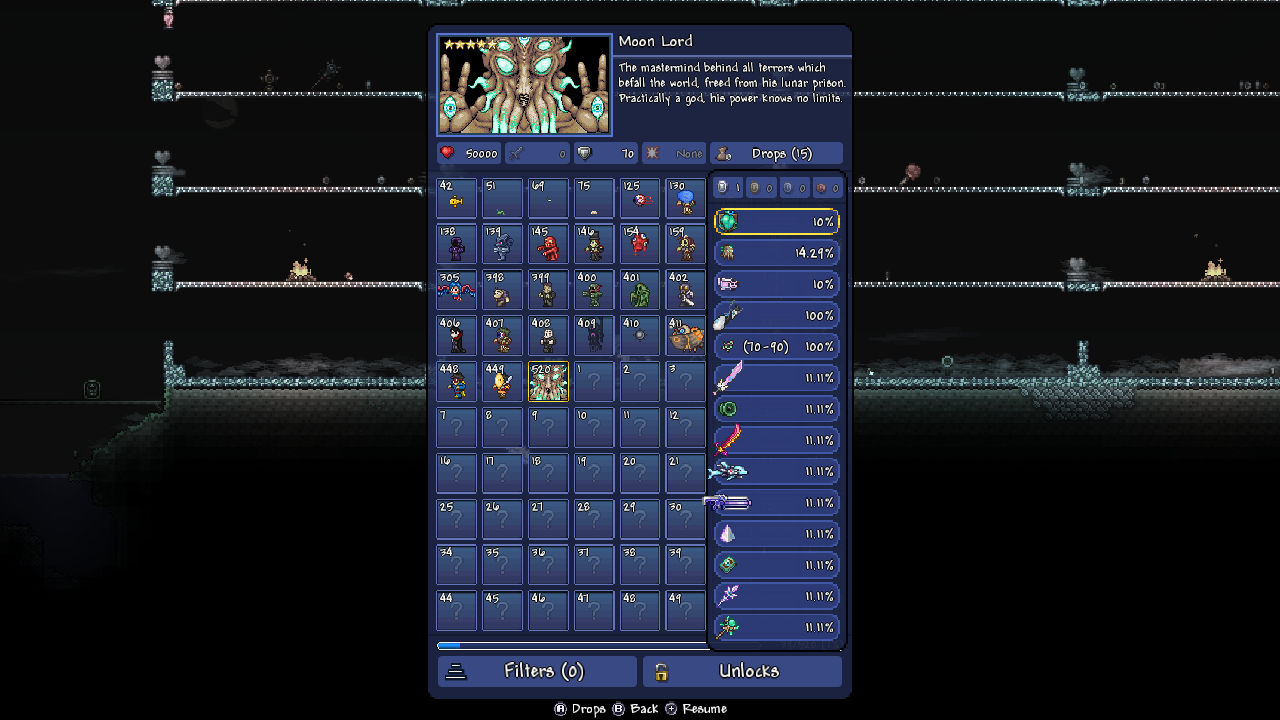 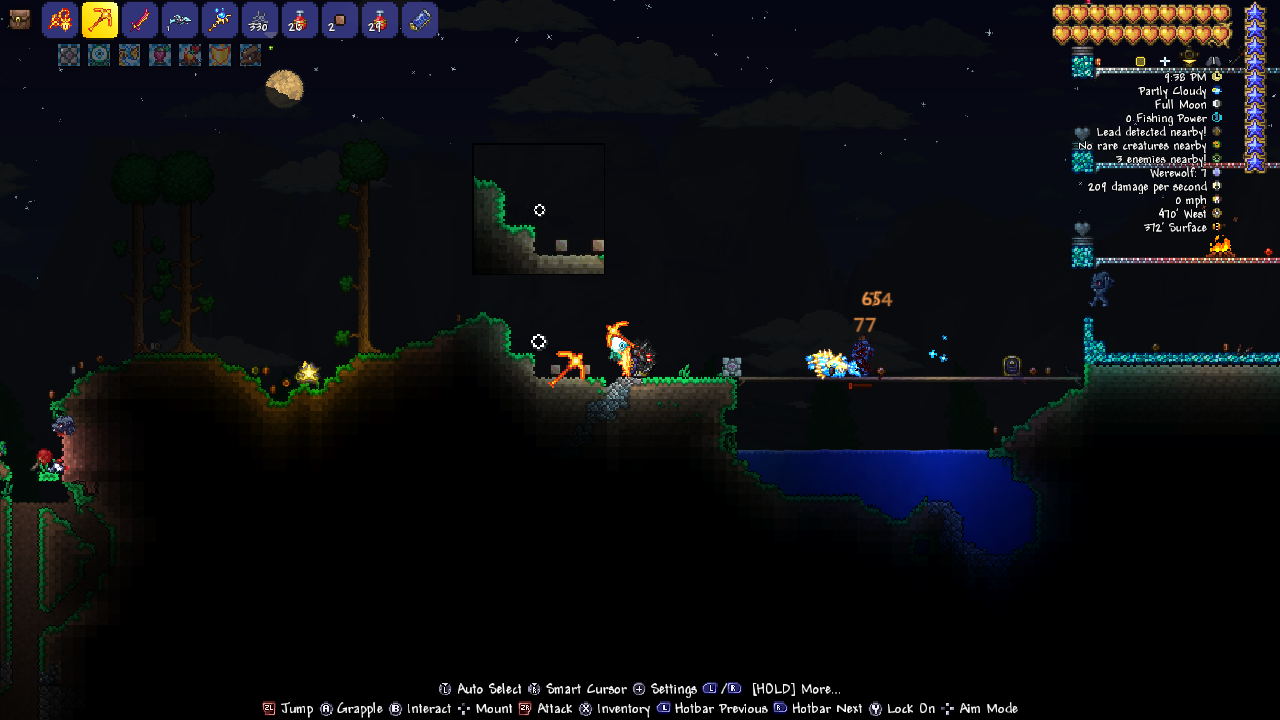 In terms of timing, we are starting to hone in on what things will look like. We are confident in that the game will be submitted to Nintendo this year. When or not we see a launch to players will really come down to the results of that submission process - amidst the complications of the impending Holidays. We want to be sure to get it out as quickly as possible to players, but also in a timeline that allows us to be able to quickly respond to any launch issues, as we did with Xbox and PlayStation. We expect to be able to share more detail on this very soon - but as always, we want to be 100% certain of things before giving dates. Stay tuned!

Mobile Terrarians, we are growing ever-closer to a return to development - this time, alongside our Console friends! The team is eagerly anticipating jumping headlong into bringing content parity to all platforms in the new year, we just need to get Switch out and stable first. Not much longer now!


We have also been made aware of some issues impacting some players in regards to Android 11. The team will be looking into this shortly, and we will get any needed fixes out just as soon as possible!

The merchandise hub has a few new items added over the past month... and there are a lot more coming very soon! Big plans here for the 2021 Holiday season - so this is a place you will want to watch for all of your gift-giving (or rewarding yourself

We will be keeping this up to date and continuously adding to the offerings available here - so this is a page you will want to bookmark and check often!

TERRARIA MERCHANDISE UPDATES
We still have a handful of partnerships and products that remain under wraps, but that we will be revealing just as soon as the time is right - our plan is to have a LOT more out for the holidays. That said, what better time than the State of the Game to check in on news from our existing partners as well as to shine a light on some other things that are in the works?

Our fantastic partners over at Vidglo (https://terraria.shop/) have been hard at work on some new offerings for the Fall/Winter season. This includes the recently-released Halloween 2021 Collection!

You can also find quick links to each of these spooky products on the Merch Hub[terraria.org] - these are some real treats that any Terrarian will want to pick up, no tricks!

A few weeks ago, preorders began for this amazing one-of-a-kind super high-end collectible resin statue from Animegami Studios! To be clear, this is a very high-end piece that is intended for the hardcore Terraria fan - and may not be for everyone. That said, our good friends at AGS have done what they can to enhance the affordability via an array of interest-free payment plans that spread out the cost over time. 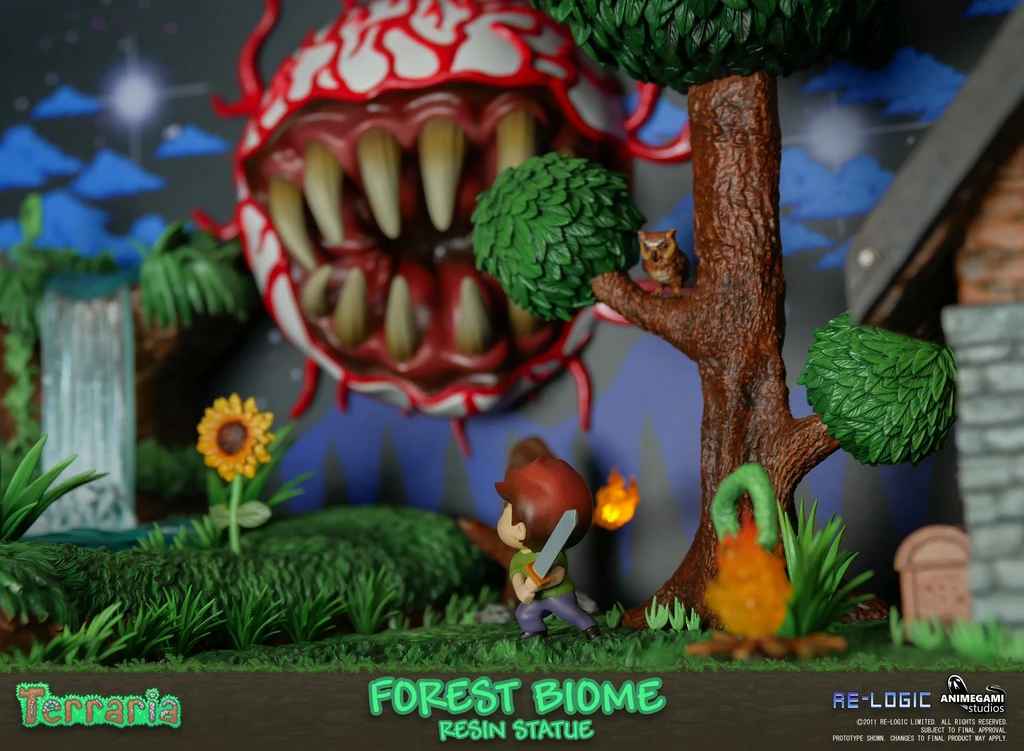 [animegami-studios.com]
Click the image above to check out the details and to preorder the Forest Biome Resin Statue!

In case you missed our earlier announcement, we have a couple of Halloween Contests going on where you can show your spooky side as well as your love for Terraria all at once! This year, we are running an in-game costume contest along with our long-standing traditional pumpkin carving contest.

Check out all of the rules and details via the link below - remember, all entries must be in by 11:59PM Eastern Time on Monday, November 1! 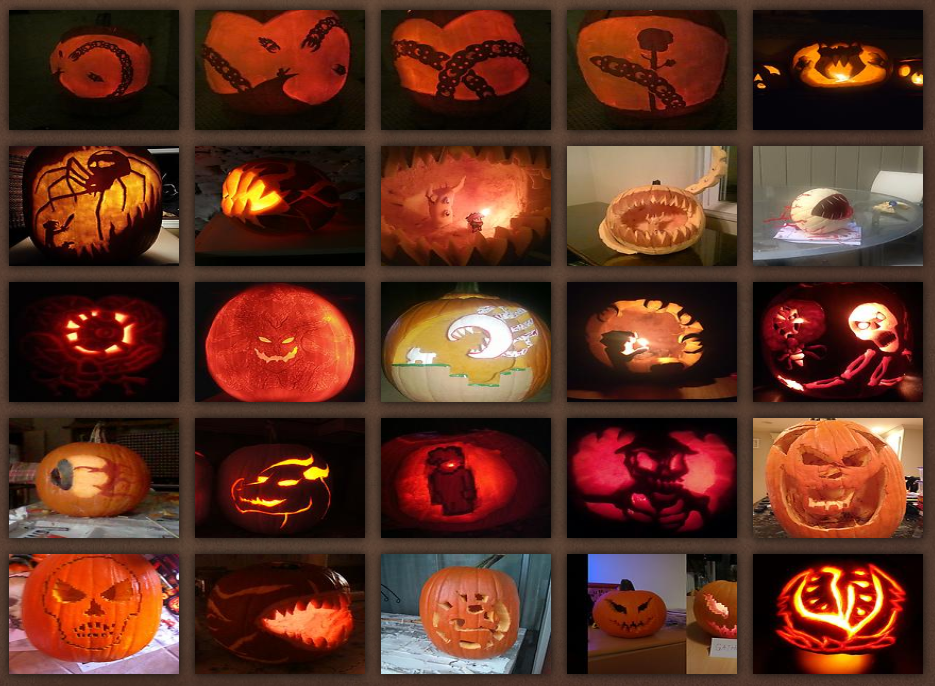